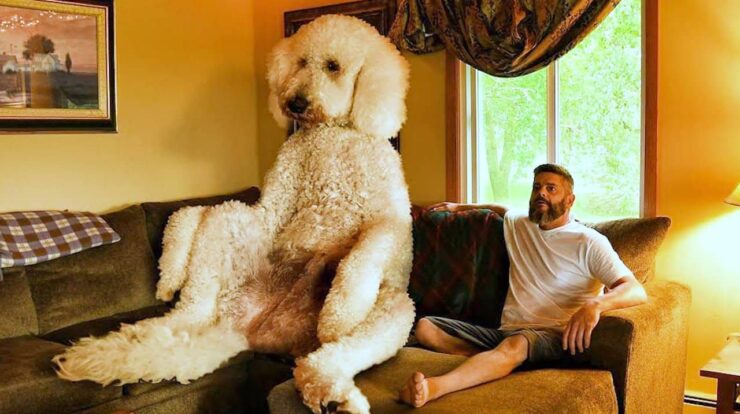 If you haven’t seen photos of Juji or Jasper yet, you’re in for quite the treat. Both Juji and Jasper’s pictures are known for, let’s say, being larger-than-life. From their amusing size to the comical adventures they get up to, over the years, whenever I’m feeling down, I love to check out their latest photos. Over those years, I’ve also collected a lot of interesting facts about them. So without further suspense, here are my 7 favorite facts about Juji and Jasper, the gigantic dogs.

1. They’re Not Really That Enormous

First, let’s get this out of the way. Both Juji and Jasper are, in fact, real-life dogs. But after seeing some of the photos, you may think something is fishy about them. They change sizes a lot! Like, one-second Juji looks like he’s a 200-pound dog, then in the next pic, he’s like 400 pounds, and Jasper is the same way. Like what is going on here?!

Kidding aside, while Juji and Jasper are real dogs, they are definitely not 400 pounds. They aren’t even close to weighing 200 pounds. They’re more around 80 pounds, which is still considered large for a dog breed, but not giant. Some dog breeds easily surpass the 100-pound threshold, with some of the larger ones getting close to the 200-pound marker. So what kind of breed are Juji and Jasper, anyway?

Both Juji and Jasper are Goldendoodles, a newer breed created by crossing a Golden Retriever and a Poodle. If you’re familiar with either breed, you already know that the Goldendoodle is a stunning breed. Friendliness, big social personalities, and wicked smarts define the Goldendoodle dog breed.

2. Christopher Cline Is The Man Behind The Internet Sensation

Meet Christopher Cline, the man behind the internet sensation, Juji and Jasper, which has gained him almost 300,000 followers on Instagram alone. As a photographer, Chris is a wiz at photoshop, hence the reason many of his more “reality-based” or early photos of Juji are so convincing. And both Juji and Jasper’s enormous size are just that, a result of photoshop.

After moving from Virginia to Minnesota, Chris says he was feeling down a lot, and to help out, his girlfriend, Christine Ann Fagerlie, surprised Chris by getting him Juji. Hesitant at first, Chris immediately fell in love with Juji. And soon, their antics and adventures not only inspired the creative photos, but they would also help Chris get out of his funk. Christopher decided to share his first photos of Juji, the Ginormous 450-pound dog, in 2016, and it wouldn’t be long before the only thing bigger than Juji was his fame.

In 2019, for April Fool’s Day, The Dodo decided to feature Juji, even bringing Chris on board to help out. In the video, Chris calmly jokes that Juji was a normal-size puppy but started growing out of, well, everything, when he turned one-year-old. Rushing Juji to the vet’s office, Chris learns Juji has a rare, never before seen, condition where he has too much calcium and vitamin D in his bones.

But don’t worry folks, it all completely made up. Juji and Jasper are both happy, healthy, normal size dogs. In fact, it’s probably impossible for any modern dog to surpass 350lbs, let alone the 100 pound more Juji is touting at weighing. The heaviest and longest recorded dog was a pup named Alcama Zorba of la-Susa or just Zorba. Coming in at an astounding 345lbs and 8 feet, 3 inches from nose to tail. I shudder to think what it was like cleaning up after him.

From mentions on media outlets like Today and BuzzFeed to celebrities like Adam Levine and Ashton Kutcher raving about him, Juji has national appeal.

4. The Goldendoodle Is A Designer Dog Breed

While not 200+ pounds or even 100 pounds, the Goldendoodle is a rare breed nonetheless. Goldendoodles are a result of crossing the Golden Retriever and Poodle together. Two of the most popular dog breeds, both in the United States of America and in much of the world. This makes them a hybrid dog breed, and to separate them from mutts or unintentionally mix breeds, the Goldendoodle is considered a designer dog breed.

However, while rare, in a sense, they are a “designer” breed, with both Golden Retrievers and Poodles being very popular dogs, the Goldendoodle isn’t a rare sight like many of the other designer breeds. With some designer breeds, the only way to find them is through a private breeder, but with a little more work and some patience, you can find a Goldendoodle that needs rescuing fairly easily.

If you find yourself loving the Goldendoodle, make sure to check out the Labradoodle as well, which is a breed that’s a cross between the Poodle and the Labrador Retriever. Labradors are closely related to Golden Retrievers, and whenever you find a breed you like it’s always a great idea to check out similar breeds before choosing a puppy.

5. You Can Follow The Life And Time Of Juji and Jasper On Social Media

Can’t get enough of Juji and Jasper? Then make sure to check out Christopher Cline’s Instagram for all things Juji and Jasper. Highly recommend checking out some of the newer photos for some quite amusing and creative photos.

6. Both Juji and Jasper Names Have Colorful Meanings

Juji means “Heap of Love” in West Africa. Juji’s name could also be a play on the “juji”. Good juji and bad juji; juji is the spiritual belief that our actions have consequences that affect our luck. Coincidentally, while the practice originates out of West Africa, “juji” is not a West African word, but French where it means “plaything”.

Most commonly believed to be of Persian origin, Jasper means “treasurer” and is thought to be one of the names of the Three Wise Men that traveled to Bethlehem for Jesus’ birth. Jasper can also mean “spotted or speckled stone”. Unrelated to the other meaning, the Persian etymology, Jasper is a type of quartz known for its range of opaque colors and versatility in ancient production.

7. Juji And Jasper Love Living It Up In The Big City

Juji, Jasper, and Chris love the outdoors, so if you’re a Buffalo, Minnesota resident, don’t be surprised if one day you run into the trio. 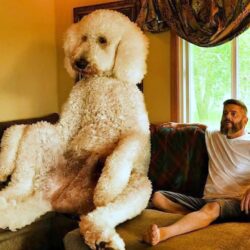 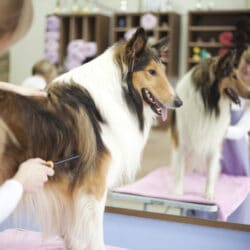