According to the World Canine Organization, there are over 300 different breeds of dogs. These breeds are then subcategorized into groups according to a dog’s physical or behavioral characteristics, as well as their purpose.

One of these groups is the non-sporting group, a group that houses a variety of dogs that don’t fit specific characteristics.

The dogs in this group include the French bulldog breed. French Bulldogs are unique in that their breed also has multiple varieties. Keep reading to learn all about the different types of French bulldogs.

Before explaining the types of French bulldogs, it is important to distinguish what makes French bulldogs different from other types of bulldogs. There are three primary bulldog breeds: French, English, and Australian.

There are two types of American bulldogs, each named after their breeder. The first type, the Johnson, is the larger of the two, characterized by its stocky and muscular build. The second type is the Scott, which has a similar muscular build, but is smaller in size and has a longer muzzle than the Johnson.

The American bulldogs are often used as working dogs or show dogs, however, they are friendly and loyal which makes them great family dogs.

The English bulldog is short, and often recognized for its heavy wrinkles. These bulldogs have minimal endurance and low exercise needs, and they are very sweet and gentle. They make for great companions.

Lastly, there are the French bulldogs. These bulldogs are known for their small, compact size, except for their large bat-like ears. They have square heads and wrinkled faces.

French bulldogs are differentiated by the color of their coat. Common French bulldogs have coats in one of the following colors: white, fawn, brindle, and pied. White is self-explanatory, but these bulldogs are often darker in color in their face.

Fawn bulldogs appear cream in color, but their faces, specifically their eyes, nose, and mouth, are often black.

Brindle dogs are multi-colored, rather, their coats have a base color, with spots or other color strands mixed in. Three types of brindle patterns are dark, tiger, and seal. Dark brindle dogs are often fawn in color, with dark or black hair mixed in.

Bulldogs with a tiger brindle pattern have coats with light and dark colors, appearing as stripes along the body.

Seal brindle is bulldogs with dark coats with a scattering of white hairs or white patches.

Finally, French bulldogs can be described as pied. Pied dogs have white bodies but are often decorated with dark patches. The most common placement of these patches is black circles around the eyes.

Aside from color, the other characteristic that differentiates French bulldogs is the French bulldog personality. French bulldogs are highly excitable and require a lot of time and attention from their owners. These dogs are playful and full of energy.

However, this doesn’t characterize all French bulldogs. Some are very mellow, lazy even, and only become hyperactive when they aren’t getting enough attention.

Color and personality are the primary characteristics that differentiate the types of French bulldogs. However, regardless of the coloring your bulldog has, or whether they are energetic and playful or lazy, the French bulldog is the ultimate companion, perfect for single-person homes or families with children.

Check out the rest of our site for more information on dogs as well as other popular pets! 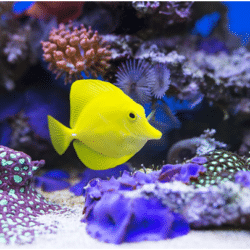