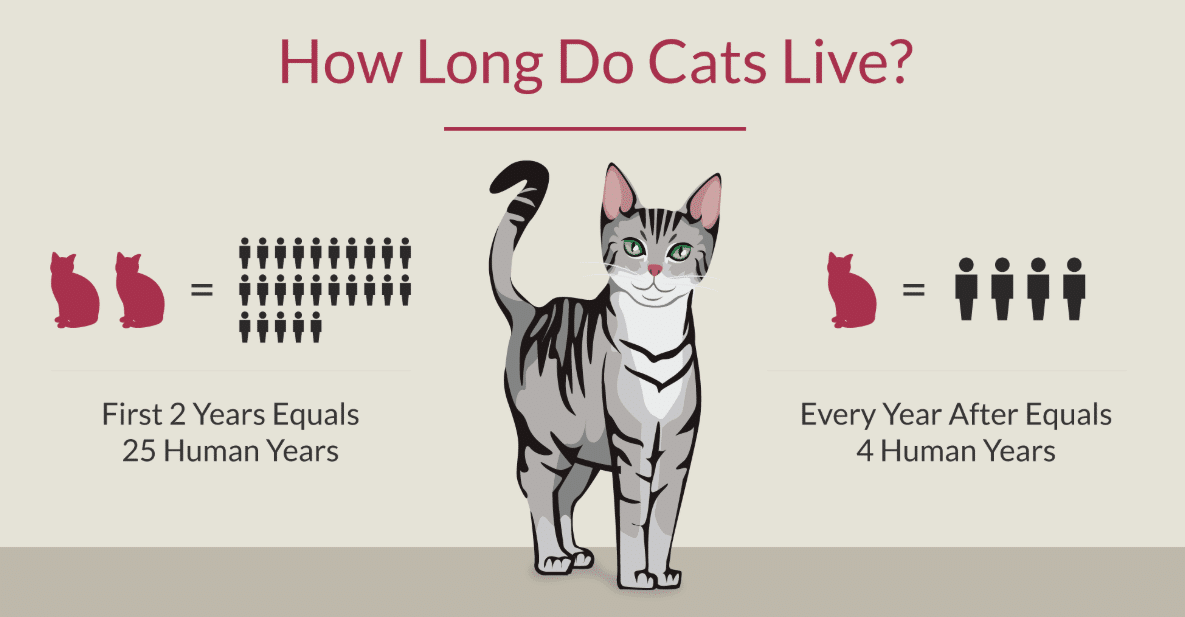 How Long Do Cats Live?

How Long Do Cats Live?

How Long Do Cats Live: We all want our cats to live forever (except when they’re waking us up at 6am for biscuits), and while feline immortality is still out of our grasp, it’s not that unusual for cats to live into their 20s – a solid effort for such little guys. But how can you tell if your cat has a good shot at making it to 21 – the feline equivalent of 100 – and can you change its fate?

Two major studies have brought together knowledge from a team of veterinary experts from around the world on the common changes experienced by ageing cats, looking at everything from musculoskeletal system wear and tear to cognitive and behavioural health.

How Long Do House Cats Live

Cats may not really have nine lives, but factors such as diet, healthcare and environment can have an impact on how long a cat can live. Neutered cats tend to live longer because neutering prevents reproductive diseases and neutered cats are less likely to roam. While dependent on many things, including luck, some domestic cats can live to up to 20 years old. During their life they will go through six key life stages which may help owners understand certain health/behavioural problems that could arise and things to keep an eye on.

This is the best stage to introduce your cat to lots of new things such as other pets, household noises, being brushed and handled, as well as familiarising them with children. You’ll see them go through their most rapid growth spurt during this time. This is also a good time to neuter your pet to stop unwanted litters.

Your cat will reach full size during this period of time and will have reached sexual maturity.

It is important to play appropriately with your pet as this will teach them how to play nicely with people. This means ensuring not to play rough and tumble games with your cat; instead, use toys to engage with them. Playing with your hands can encourage biting and scratching, which may seem cute when they’re a kitten, but remember that they soon grow up and the bites and scratches will get harder.

As the name of this phase suggests, your cat will be at its prime in life during these years. While they are young and healthy it’s still important to ensure that your cat remains up to date on their vaccinations and health checks to help prevent any diseases or illnesses.

At this age your cat will be the human equivalent of someone in their mid-forties to mid-fifties. This means that you may notice your pet starting to slow down and they are more likely to put on some weight. It’s important to carefully monitor their food consumption so that they are having the right amount for their level of activity. If you are unsure as to whether your cat is overweight or unsure on how to cut back on meal times, please speak to your vet.

How Long Do Indoor Cats Live

The aim was to establish the signs of healthy ageing in cats, because while it’s generally accepted that there’s a lot that owners and vets can do to ensure the physical and mental health of older adults, that’s not much help if you don’t know what signs to look out for.

This is especially pertinent now, with roughly 20 percent of cats in the US estimated to be 11 years or older.

Anyone with a cat in their life will know that they’re probably going to stick around for a while, with the average lifespan of indoor house cats these days hitting an impressive 12 to 15 years.

This has increased dramatically over the past few decades, with the average cat living to just seven years in the early 1980s, and just over nine years in 1995. If your cat ages in a healthy way, chances are they’ll even make it to their 20s. And who knows, maybe yours will rival Creme Puff, the oldest known cat, who lived to a ripe old age of 38, enjoying a rather sophisticated diet of bacon and eggs, asparagus, broccoli, and coffee with heavy cream.

High fives, Creme Puff, you were awesome. Just to give you an idea of how incredible Creme Puff was, here’s the rundown of cat years vs human years, from the Cornell University College of Veterinary Medicine:

So what does healthy ageing in a cat look like? According to the two studies, published in the Journal of Feline Medicine and Surgery here and here, as your cat ages, it will likely experience several behavioural changes; changes in appearance; and functional changes, related to its physical health.

The researchers say that your cat should retain its ability to play and jump through ageing, even if it’s a bit reduced, and should be able to maintain a healthy weight with no significant changes to muscle mass or body fat.

Fur might start thinning, whiskers could turn black, and the skin might go scaly with reduced cleaning.

How Long Do Cats Live Indoors

“A novel must be exceptionally good to live as long as the average cat.” This aphorism is widely attributed to Philip Stanhope, the Fourth Earl of Chesterfield. Lord Chesterfield lived through the period of English literary history when novels were just becoming popular, and there was already a sense that all forms of media were ephemeral. What did Chesterfield have in mind? How long do cats live, on average?

What are the facts on the lifespan of a cat? Here at Catster, we’ve done the research on the average cat lifespan and have all the information you need to answer the question, “How long do cats live?” We’ve crunched the numbers and can tell you that, like novels, the life expectancy of cats depends on a variety of circumstances, including environment, diet and health. We’ll give you information on everything ranging from the general question “How long do cats live?” to the average age of the “current” oldest living cat, the average of the outlying ages, and the averages for indoor and outdoor cat lifespan.

How Long Do Domestic Cats Live

Pet parents want to know how long they can expect their cats to live. The information helps with practical planning and emotional readiness. And while nobody can tell you exactly how long an individual’s lifespan will be, statistics do allow us to answer the question “How long do cats live?” in a general way.

The feline life expectancy that is quoted in reference texts varies, but a good, average figure is 10 to 15 years. Another statistic that veterinarians commonly use in practice is the following:

Cats who spend significant unsupervised time outdoors tend to survive to be about 7 years old, while indoor-only cats can be expected to live to around 14 years of age.

These numbers may seem low, but they represent an average of the lifespans of ancient, well-cared-for kitties; unfortunate individuals who died early from disease or accident; and everybody in between.

Here’s an example using a rather typical litter of four. The senior citizen of the group makes it to 18 years old, with another sibling dying from an age-related disease at a very respectable 15. So far, so good. However, one littermate succumbed to an infectious disease as a kitten and the fourth cat was killed by a car at the relatively young age of 10. If you look at the litter as a whole, they fall on the low end of that 10- to 15-year life expectancy range, despite the longevity of two of the cats.

Another way to answer the question “How long do cats live?” is to look at the different aging rates of pets and people. In other words, we can ask “How old is my cat in ‘human’ years?”

An often-quoted formula says that we should multiply a cat’s actual age by five to get its age in “human” years, but this is inaccurate because cats experience their entire infancy, childhood, and a large part of their adolescence in their first year of life. A chart produced by the American Animal Hospital Association and the American Association of Feline Practitioners does a much better job of comparing human and feline life stages:

What is the average life expectancy of an indoor cat?

According to the ASPCA, the average lifespan of an indoor cat is 13 to 17 years, and cats who live up to 20 are not uncommon.

What is considered old age for a cat?

In recent years, feline ages and life-stages have been redefined, cats are considered to be elderly once they reach 11 years with senior cats defined as those aged between 11-14 years and geriatric cats 15 years and upwards. When caring for older cats it sometimes helps to appreciate their age in human terms.

How long do indoor and outdoor cats live?

Cats who are kept indoors can reach the ripe old age of 17 or more years, whereas outdoor cats live an average of just two to five years. Another reason for indoor cats‘ longevity is that it’s easier for their owners to identify health problems early, before they become life threatening.
« Facts About Koi Fish » Gabapentin For Dogs Uses