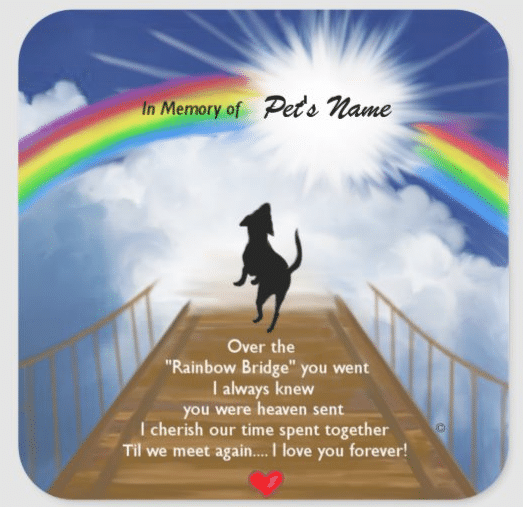 Rainbow Bridge Poem: When an animal dies that has been especially close to someone here, that pet goes to Rainbow Bridge. There are meadows and hills for all of our special friends so they can run and play together. There is plenty of food, water and sunshine, and our friends are warm and comfortable.

They all run and play together, but the day comes when one suddenly stops and looks into the distance. His bright eyes are intent. His eager body quivers. Suddenly he begins to run from the group, flying over the green grass, his legs carrying him faster and faster.

The Rainbow Bridge is the theme of several works of poetry written in the 1980s and 1990s that speak of an other-worldly place where pets go upon death, eventually to be reunited with their owners. One is a prose poem whose original creator is uncertain. The other is a six-stanza poem of rhyming pentameter couplets, created by a couple to help ease the pain of friends who lost pets. Each has gained popularity around the world among animal lovers who have lost a pet or wild animals that are cared for.

The belief has many antecedents, including similarities to the Bifröst bridge of Norse mythologyThe relationship between humans and animals is special because somehow, when the world gets to be too stressful, or when you seem to face any type of challenge — your pup is there. And your pet doesn’t judge you, doesn’t ask you to explain. Your dog simply lays its head in your lap and loves you. The loss of a pet is a terrible loss. There’s a poem, called the Rainbow Bridge poem, that can help you mourn the loss of a pet.

It starts so sweetly and unassumingly. You bring your pup home. Whether it’s a newborn pup or an older rescue, it doesn’t take long for you to get used to your pet in your home: digging through your laundry, sleeping on your shoes, and licking your eyelids to wake you for a walk.

And before you know it, your pup’s a part of your life. Loves you, needs you… and you need your pet more than you thought you would. It’s strange because they can’t speak… but they understand every word you say (namely “walk,” “treat,” “bath,” and “love”).

When an animal dies that has been especially close to someone here, that pet goes to Rainbow Bridge. There are meadows and hills for all of our special friends so they can run and play together. There is plenty of food, water and sunshine, and our friends are warm and comfortable.

All the animals who had been ill and old are restored to health and vigor. Those who were hurt or maimed are made whole and strong again, just as we remember them in our dreams of days and times gone by. The animals are happy and content, except for one small thing; they each miss someone very special to them, who had to be left behind.

They all run and play together, but the day comes when one suddenly stops and looks into the distance. His bright eyes are intent. His eager body quivers. Suddenly he begins to run from the group, flying over the green grass, his legs carrying him faster and faster.

You have been spotted, and when you and your special friend finally meet, you cling together in joyous reunion, never to be parted again. The happy kisses rain upon your face; your hands again caress the beloved head, and you look once more into the trusting eyes of your pet, so long gone from your life but never absent from your heart.

In the same way you might hold a memorial for a beloved family member and share words of comfort or play music, you can do the same when losing a pet. The Rainbow Bridge poem is a beautiful way to remind yourself that the human-animal bond is strong, and that your beloved dog gave your life true value

Your dog made your home feel like home; therefore, pet grief can mean feelings of isolation, anger, frustration, and extreme sadness. Losing a pet is never easy, but poems and lyrics like those in The Rainbow Bridge poem might remind you that it’s okay to feel and to remember.

The story tells of a lush green meadow just “this side of Heaven” (i.e. before one enters into it). Rainbow Bridge is the name of both the meadow and the adjoining pan-prismatic conveyance connecting it to Heaven.

According to the story, when a pet dies, it goes to the meadow, restored to perfect health and free of any injuries. The pet runs and plays all day with the others; there is always fresh food and water, and the sun is always shining. However, it is said that while the pet is at peace and happy, they also miss their owner whom they left behind on Earth.

When their owner dies, they too arrive at the meadow, and that is when the pet stops playing, turns, sniffs at the air and looks into the distance where they see their beloved owner. Excited, they run as fast as they can, until owner and pet are once more in union. The pet licks its owners in joy while the human looks into the soft eyes of their pet—who might have been absent on Earth, but never absent in their heart. Then side by side, they cross the Rainbow Bridge together into Heaven, never again to be separated.

Having been circulated widely around the world, the prose poem’s original authorship is uncertain. About.com suggests three presently known contenders to the development of the prose poem:

The genesis of the rhyming poem is straightforward: spouses Diane and Steve Bodofsky operated a ferret rescue that specialized in gravely ill animals and had many friends whose loss of pets were acutely painful; they wrote the poem for them. But when a local veterinarian asked if they could make it the basis of sympathy cards he might send to his patients, the poem gained popularity. The internet widened the restorative power of the poem internationally.

A Washington Post reporter opines that: “It is, in free verse form, “Chicken Soup for the Soul” for an exploding $69 billion pet care industry.

Is there a rainbow bridge for dogs?

The pet’s health is fully restored and it can run and play as it did in its prime with unlimited food and water. There, the pet waits until its human companion dies and is reunited with them in the meadow. Together, they cross the Rainbow Bridge to heaven.

Who wrote the Rainbow Bridge poem?

Although it is usually attributed to an unknown author, at least three men claim to have written it — one, Paul C. Dahm, even holds a copyright for a variation. All three wrote similar books in the 1990s on pet loss after claiming to have penned “The Rainbow Bridge.”

Where is the rainbow bridge for pets?

Rainbow Bridge Pets Story. In the rainbow bridge story that was written by an unknown author in 1980s or early 1990s, dying pets are transported into a lush green meadow located at “this side of Heaven” where they can live in perfect health peacefully.
« Gabapentin For Dogs Uses » What Is Cat Grass?