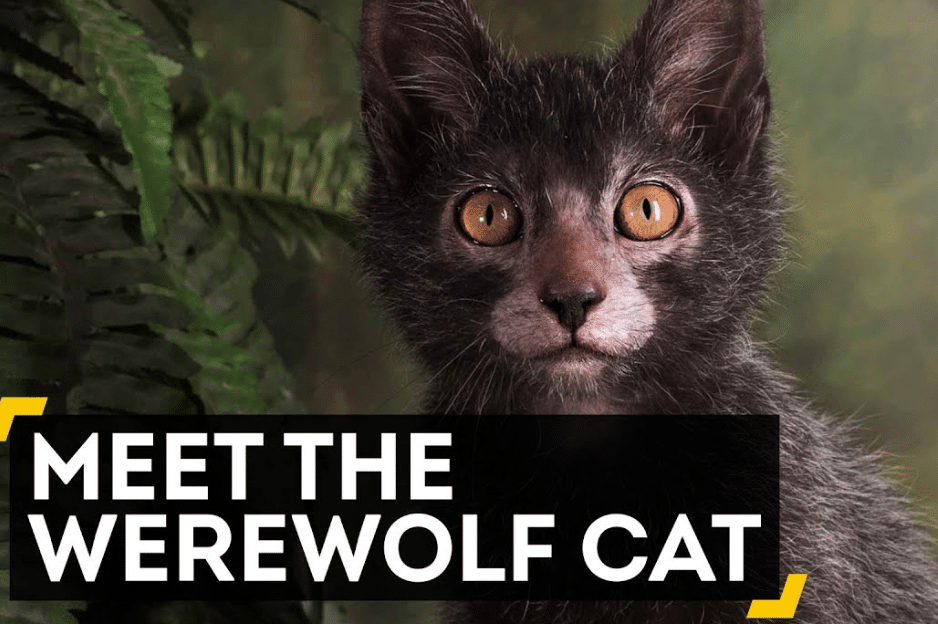 Lykoi Cat: The Lykoi is a natural mutation from a domestic shorthair that has the appearance of a werewolf. The mutation has occurred in domestic cats over the last 20 years. DNA testing has been done by UC Davis to confirm that the cats do not carry the Sphynx/Devon gene. The Lykoi breed was developed in Vonore, Tennessee and is said to resemble a werewolf. The word “lykoi” means ‘wolves’ in Greek.

Lykoi vary from completely covered in hair to partially hairless. Sometimes they may lose all of their hair resulting in them looking like a Sphynx but it grows back. Lykoi are genetically distinct from the Canadian Sphynx. The hair coat is unique in appearance in that it resembles the coat of an opossum when mostly coated. Standards call for a solid black roan coat, a wedge-shaped head, and a lithe body of solid weight without excessive bulk. Lykoi are said to be friendly and unchallenging in their behavior. They display a high level of affection for their owners.

Two different sets of domestic shorthairs with the Lykoi gene were adopted from a rescue after being discovered in Virginia in 2010, by Patti Thomas, who co-founded and named the breed, and in 2011, a second pair were located in Tennessee, by Johnny Gobble.

The Lykoi went before The International Cat Association (TICA) registry in 2012 and was passed to “Registration Only” status by unanimous consent. The breed is now recognized as a Championship Breed and can begin competing against other Championship breeds in May 2017, with TICA. Work is currently being done to expand the breeding program.

The Lykoi is a naturally occurring gene in the feral cat population. The Lykoi breed was founded in 2011 by Johnny Gobble, Brittney Gobble, and Patti Thomas when two unrelated litters of kittens were presented to the founders as unique cats. The Gobbles did careful health evaluations to ensure that the cat’s unusual appearance was not caused by sickness or disease. To prove it was a gene, Johnny Gobble bred two of the unrelated cats to produce the first intentionally bred Lykoi. Since the mother to one litter was a black domestic, extensive outcrossing with shorthair black domestic cats began. With time, it was determined that the gene was recessive, and to continue to reduce genetic inbreeding, more outcrossing with the black domestic cats was done. There are still Lykoi cats born to the feral cat population, and sometimes they can be used in the breeding program. Once Championship status is reached, there should be enough outcrossing to ensure that inbreeding is minimal.

Legends of men turning into wolves date back to antiquity. Viking sometimes wore wolf skins into battle, thinking it would make them as fierce as wolves. The legends of werewolves came into full force in medieval Europe when it was believed that any misadventure must be the fault of some demonic entity.

Because of a naturally occurring mutation found in black domestic shorthairs, Lykoi cats have no hair around the eyes, nose, ears and muzzle and go through periods of patchy hair throughout their lives. The mutation prevents the cat from developing an undercoat and growing a full coat of hair.

It was the 1941 Universal film The Wolf Man that the modern idea of a man turning into a wolf under a full moon began to enter the public imagination in full force. Now, it seems there is a new breed of cat that closely resembles the werewolf as depicted by Lon Chaney Jr.

The Lykoi is also known as the werewolf cat or wolf cat due to looking more like a wolf than a cat. The bald patches around the luminous eyes and muzzle cause a resemblance closer to a werewolf still in transition. This appearance is due to a random mutation found in feral cats. They were called “Lykoi” after the Greek word for “wolves”. According to Greek myth, a man named Lycan angered Zeus by tricking him into committing cannibalism.

As punishment, Lycan was turned into a wolf. (The moral of this story is the same as many Greek myths. Angering the gods will get you turned into an animal.) Today “lycanthropy” is used to describe a delusional disorder in which one believes one is an animal. The little lycan cat has been observed as acting more canine than feline.

Origin of the Lykoi cat

It all started when a pair of different litters of domestic shorthairs carrying the Lykoi gene were adopted from a rescue shelter after being found in Virginia in 2010, by Patti Thomas, who co-founded and named the breed. It was in 2011 that another pair was found in Tennessee by Johnny Gobble, a practicing veterinarian in Vonore, Tennessee.

A complimentary DNA test performed by Dr. Leslie Lyons on the kittens confirmed that they did not carry Sphynx or Devon genetics as first suspected. Diseases and infections were also ruled out. As Ms Thomas had neither the time nor resources to put in the extensive effort towards all the genetic and health testing required to establish a new breed she chose to give them to Dr. Johnny Gobble and his wife, Brittney Gobble.

The Lykoi is not the result of an interbreeding of recognized cat breeds, but a breed resulting from interbreeding cats that happen to have the same naturally occurring mutation. The Gobbles bred their new cats with black cats as they carried genetics similar to this odd mutation. This resulting in the majority of Lykoi having black roan fur, black hairs sparsely mixed with white ones.

As of now, the Gobbles avoid breeding Lykoi cats with other Lykoi cats as that would decrease the genetic variability of the offspring. Purebred cats often suffer health problems such as a weakened immune system. This is something the Gobbles want to avoid. They do this by breeding their Lykoi with black cats rescued from shelters and occasionally a feral cat as they have a diverse gene pool.

Dr. Gobble has expressed a hope to one day be able to safely breed one Lykoi with another. For now, health and genetic variability comes before looks.

Getting any breed officially recognized is a long and winding road. Dr. and Mrs. Gobble first had to bring the Lykoi before The International Cat Association (TICA) in 2014 where they were unanimously passed to “Preliminary New Breed” status. The next year, they were promoted to “Advanced New Breed”. The next year, TICA brought them up to Championship status.

This new breed of cat has no undercoat, causing the fur to stick out a bit as if it were perpetually in the act of still growing in. This fur is often grizzled. Patches around the eyes, nose, toes and tale are often bare. (Incidentally, in the old werewolf stories it was said that the werewolf had no tail but would stretch out a back leg to pass for an ordinary wolf from a distance.) The nose is rather long and black at the tip like a wolf. (The better to smell you with, my dear!)

Fortunately, the attitude of the Lykoi is more similar to that Of Remus Lupin from the Harry Potter series than the monster of medieval myth. (The werewolf portrayed by Lon Chaney Jr. was likewise a tragic figure.) Like Professor Lupin, the Lykoi is intelligent but not without a sense of fun and possessing a fierce loyalty. Lykoi tend to be shy around strangers but can warm up quickly.

One odd wolfish habit Lykoi have is an instinct to hunt in packs. While most cats may tolerate the presence of other cats, hunting is something they prefer to do alone. When a few Lykoi get together, they’ll go after prey as a team.

It is currently unknown what a Lykoi’s full lifespan can be as the breed is so new. It is estimated that if kept safe and healthy, a Lykoi could make it to age 20. The sparse coat means oil accumulates easily in the ears and claws. This should be monitored. Lykoi kittens are a bit slow to develop and require a lot of social interaction to grow up to be well adjusted.

Thankfully, the Lykoi has not shown any specific health problems; however the scientists studying the Lykoi warn that it is too early to tell. The Lykoi kittens are only four years old. Similarly, the Sphynx cat is also a result of a natural genetic mutation that humans decided to exploit.

Even though the Lykoi are a special breed, they do not require different kinds of special care. Since they are from the domestic cat, they are treated like a domestic cat. They are not hypoallergenic and most people with allergies to cats will have allergies to Lykoi.

What is the most expensive cat?

The 20 Most Expensive Cat Breeds in the World
« What Are Cat Constipation Remedies? » How To Take Care Of Betta Fish